So there I was, at a party in Stockport, scooter parked outside, and parka being worn on the inside, when a gorgeous girl with long, dark hair, mini skirt and knee length white boots who could have walked straight out of the Ready, Steady, Go! studio, starts asking around for a lift home. The  party was dying on its feet and I couldn’t believe my luck when she accepted my offer of a lift on the back of my Lambretta. Her destination: Bredbury (where else?), my ambition? To see her again. She refused to let me in for a coffee but gave me a flyer for a new club that was opening and said she would be there the following Sunday. Her friend, Roger Eagle, legendary Twisted Wheel DJ, would be running the club, she said and it was sure to be the place to be. 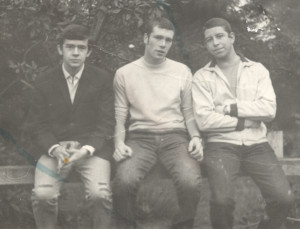 Three Blue Note stalwarts. I am on the left. Picture taken circa 1967. The guy in the middle is Mike Ashdown, the one on the right, Lawrence Werner

In today’s language, when I saw her there, she dissed me. It was my first experience of the Blue Note. Roger Eagle was playing the music in the little DJ’s booth which was situated near the bar. One of the cloak rooms girls was a posh bird who again, had been nabbed from the Twisted Wheel. What else do I remember from that first night? Another girl with bobbed hair started dancing the Charleston – she was rather good. However, after about fifteen minutes of this, most people decided she was a show-off and stopped watching – less is more I suppose…

Well a couple of days before, I had gone to a record shop in Cheetham Hill, looking for anything rare on the Cameo Parkway label or even London Atlantic which sometimes by accident appeared among the singles by Petula Clark and Solomon King. The one single I was always looking for was ‘Every Little Bit Hurts’ by Brenda Holloway. I was actually in this shop later with another so called friend who saw it at the same time as me and took it from under my nose. I never liked him, before this – hated him after. This was a legitimate trip, in other words I intended to pay for my purchases. When I opened the shop door I saw two other Wheel boys rifling through the boxes of 45’s. They were not pleased to see me for pretty much the same reason. I told them I was going to the Blue Note that Sunday and they feigned little interest. One of them later became the resident DJ.

Dave Phillips talking about Booker T and The MG’s