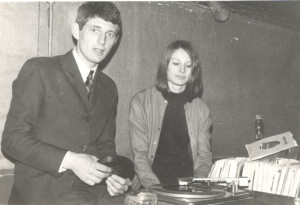 Dave Phillips in the DJ booth with an admirer…

The DJ Dave Phillips was the most long serving and enthusiastic of the Blue Note DJs. He is still going and appeared recently (2014) on Absolute Radio Soul where he was interviewed at length about the  Blue Note (and not the Blue Nile as incorrectly stated by the presenter, an entirely different club, situated in Moss Side at the time) as well as the Twisted Wheel and his novel about those times, The Manchester Wheelers. At one time, Dave even started his own company for selling and buying rare soul and R n B music but this proved to be short lived – he probably found it difficult to let go of any rare tracks he managed to get hold of. 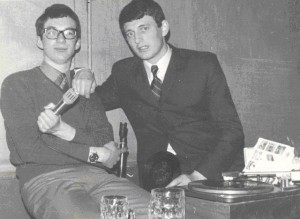 As far as Dave was concerned, soul was defined not by the label or the artist but in the words of the song What is Soul – ‘A feeling from deep inside’. In this he emulated to some extent Roger Eagle but with his own particular stamp. This is why tracks such as ‘Grazing in the Grass‘ by Hugh Masekela were played along side a diet of Stax and Chess. Booker T and the MGs was a particular favourite and  Dave was lucky enough to meet his all time hero Steve Cropper at a concert in the UK a few years ago.