↓
Dave would now and again insist upon playing records at the Blue Note that he knew would clear the dance-floor here is one story:

DL and The Rivingtons

I first knew Dave Lomas as a regular at the Twisted Wheel. Today he would probably be known as a nerd with his short hair and tortoise framed glasses. But like all the best fantasies, Dave Lomas had a fabulous talent that could really impress the girls – he was a stunning dancer. His style was unique and gave him the nickname of ‘rubberlegs’ – once seen, never forgotten. Often his dancing partners were the prettiest girls in the club but only if they could dance. His passion was for the more obscure soul tracks that could occasionally be discovered only after a vast amount of combing through racks of singles in record stores in Manchester such as Ralph’s Records, Robinsons and Rare Records. For some reason, among the many copies of 45s by Petula Clark, Ron Goodwin and his Orchestra and other favourites of the day, something unknown might appear. This had to be listened to in the shop and if it fitted into Dave’s criteria for a soul record, it would be bought and played in the Blue Note. The reaction demonstrated would decide whether this was a slow-burner or an immediate hit.Dave Lomas appeared as the solo DJ and sometimes together with the other Dave (Phillips) who were good friends having met at work in an aircraft factory and realising they had a shared passion for soul and dancing. Their musical tastes more or less coincided and they respected each other’s judgement implicitly.

Dave Lomas in the DJ booth at the Blue Note. Well and truly in his nerd ensemble

Later in life Dave Lomas lost the glasses, grew a moustache and looked at that point like most guys in the seventies. However, unlike most guys, Dave had a complete change of lifestyle, joined the Merchant Navy, married a Japanese girl and had a son. After a few years they split up, Dave met someone new and moved to Hawaii. Unfortunately, he contracted cancer and died a few years ago. He will never be forgotten by those who knew him.

Some time ago, I was having an evening takeaway with a few friends. I happened to mention the fact that I had just heard that an old friend had passed away and that he had been a terrific dancer. Just then, on Heart Radio that was playing in the background, on cue came Boogaloo Party by The Flamingoes – one of Dave’s all time favourites and one he would always get up and dance to when it was played. I hadn’t heard the track for years. 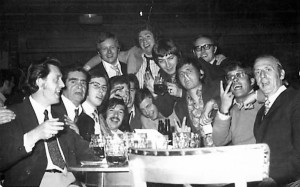