↓
The first DJ at the Blue Note was Roger Eagle way back in 1966.  I first came across him at the Twisted Wheel where he edited a magazine, R&B Scene, as well as lining up the tracks. In all the time I heard him, I can’t remember a thing he said on the mike. He wasn’t a personality who imposed his inanities upon a captive audience, he just played the most authentic music it was possible to get hold of. When I first went to the Wheel, R&B and blues was the staple diet with the odd curve ball thrown just to see what would happen. The first track I remember as I went down the stairs for the first time was ‘Life is just a slow train, crawling up a hill’ which I thought may be was Little Stevie Wonder but turned out to be John Mayall in falsetto. I still have the record somewhere that he sold to me for 2/6 – “I Put A Spell On You” by Screamin’ Jay Hawkins when he was getting rid of some old stock. 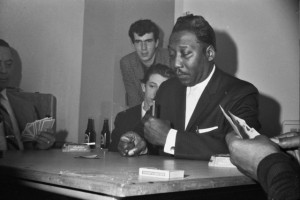 I honestly can’t say much about what Roger played at the Blue Note, to be frank I don’t think he was there for that long. Basically, if you remember what Roger played in his last days  at the Wheel, his time at the Blue Note was mainly a continuation. He quickly moved on to his own short lived club on Fountain Street, Manchester – Staxx which used to cater for the Wheel crowd by opening on Sunday morning. I went a couple of times and remember the track “What Becomes of The Broken Hearted” by Jimmy Ruffin being played as well as “Working in a Coal Mine” by Lee Dorsey. He had set the standard at the Blue Note and other DJs went on to play a mixture of authentic soul music with R&B and blues thrown in for good measure. You wouldn’t be surprised to hear Jimmy Smith thrown into the mix.